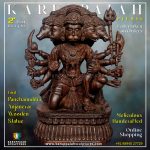 This Panchamukha Hanuman is a rare handcrafted sculpture of the Majestic & Mighty Lord Hanuman made of wood. Hanuman has five faces (PanchaMukha) and ten arms holding weapons. With the head of Hanuman in the center facing forward, Lord Adivaraha and Lord Garuda are to the right and to the left of Hanuman are Lord Narasimha and Lord Hayagriva. The lord is kneeling on a beautifully crafted peedam with his left leg placed firmly on the peedam. His front right hand shows abhaya mudra and he holds a curved knife in his front left hand. His four rear right hands are holding chakra, khanda, gada and conch while his four rear left hands are holding a bowl filled with blood, dhaalam, parashu and trident. His tail is placed near his left leg on the peedam. The lord is adorned beautifully with ornaments and sculpted finely by us.

No products in the cart.

Free shipping on all orders over $75